Storm Collectibles are about to unleash their Gears 5 line featuring Kait Diaz, Augustus Cole, and the legendary Marcus Fenix. Each figure is armed to the teeth with killer accessories providing an authentic look true to the Gears franchise. These high-end figures deliver an uncanny likeness to their video game counterparts that will make any fan proud to have them in their collection.

Gears 5 is taking players in a different direction a,nd in this outing Kait Diaz is the protagonist. Her figure comes packed with all sorts of goodies forshadowing her upcoming adventure. According to the game trailers, players will guide Kait through an expansive world as she looks to find answers to the necklace her mother gave her before she died. Collectors will have plenty of options to pose their Kait figure by recreating moments from Gears 5. 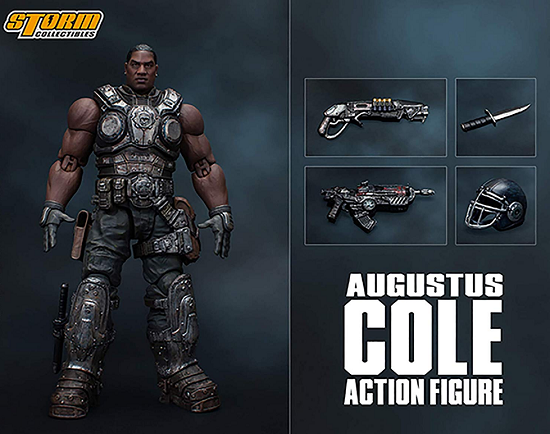 The Cole Train features 30 points of articulation and is ready to run over the Locust Horde. As a member of Delta Squad, Private Cole is known to charge head-first. It might be a good idea to equip his Thrashball helmet…

Sergeant Marcus Fenix is no stranger to war, and one could argue he’s seen and done it all. In Gears of War, humanity’s last chance of survival rests in the hands of Marcus Fenix and his Delta Squad. What are you waiting for, Marcus?

"Don't just stand there, let's get to it, Strike a pose, there's nothing to it. Vogue." -Madonna

This color variant features a vintage armor paint scheme and is available only at Gamestop.

Gears 5 is set to launch for Xbox One and PC with Microsoft Play Games Anywhere on September 10, 2019. Play the game four days early with Game Pass or with the purchase of Gears 5 – Ultimate Edition. Play the game; Collect the figures!