Our Favorite Stages in the Mortal Kombat Trilogy 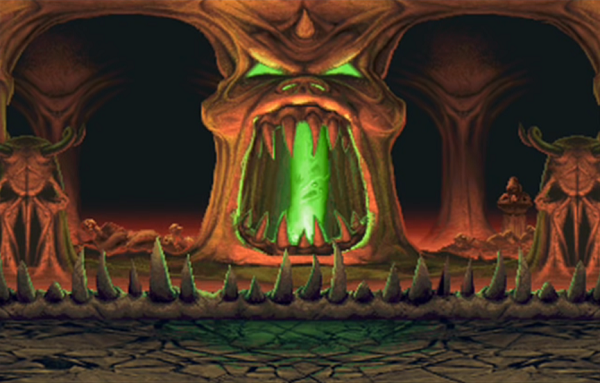 Mortal Kombat is a staple in the fighting game genre going all the way back to 1992. The franchise was an immediate success with fans and quickly rose to fame outside of the gaming community with its hardcore violence. In fact, here in the US, a congressional hearing took place discussing the impact of violent video games on children. Ultimately, these discussions led to the creation of the Entertainment Software Rating Board (ESRB) in 1994. The more you know...

Going back to Mortal Kombat, aside from the intense violence and gore, part of its charm comes from the unique stages. We thought it would be fun to revisit some of our favorite stages from the first three Mortal Kombat games.

The stage where it all started... Shang Tsung's Courtyard is the first stage players are taken to when the game boots up. Looking around we see the courtyard packed with masked guards and monks. Lastly, we see the man himself, Shang Tsung, perched high above on his chair with an unobstructed view of the carnage about to take place.

Who could forget the first time they uppercut their opponent to their death? Even if you were terrible at button combinations to execute fatalities properly, there was always the Pit. Of course, if you were on the receiving end, then it was terrible watching your character fall to their demise on a bed of spikes. Yikes!

Congratulations! You've proven you have what it takes to win Mortal Kombat. Well you've made it this far at least, why not crawl through a deep, dark cavern with glowing eyes and skeletons? Waiting for you is Goro, the defending Champion of Mortal Kombat. Go get him!

We're a sucker for stage fatalities and the Dead Pool is no exception. Players that are lucky enough to win their battle can knock their opponent into acid for a satisfying victory. I suppose you could spare them and do a Friendship or Babality finisher instead. Either way, we won't judge.

The eerie and magnificent Living Forrest made its debut in Mortal Kombat II. It was here we got a peek at Smoke and Jade as they appeared lurking in the background. Taking us back to a time of rumor and speculation on the playground. Gamers all over the world came up with fun theories and interesting stories on how to play or fight these two characters. We love it!

Upon looking at the character selection screen many people noticed both Sonya Blade and Kano are missing from the roster. It turns out, both characters are being held captive and on display in Shao Kahn's arena. How cool is that? Unfortunately, we can't interact with either of them, but somehow seeing them in chains raises the stakes.

Again, we're guilty of our love for stage fatalities. There's something to be said about falling through several floors into a bed of spikes. Win or lose, there is joy to be found in the silliness of spikes ultimately breaking your fall. We'll spare you with adding the Subway stage to this list, but just know we really wanted to include it here.

Located inside Shao Kahn's Fortress, the Soul Chamber features a stunning tree with tormented souls whirling around its open mouth. This stage also cranks the audio up to 11 with a killer soundtrack. If the combat doesn't get your heart racing the stage music certainly will.