Read or Watch: Manga vs Anime 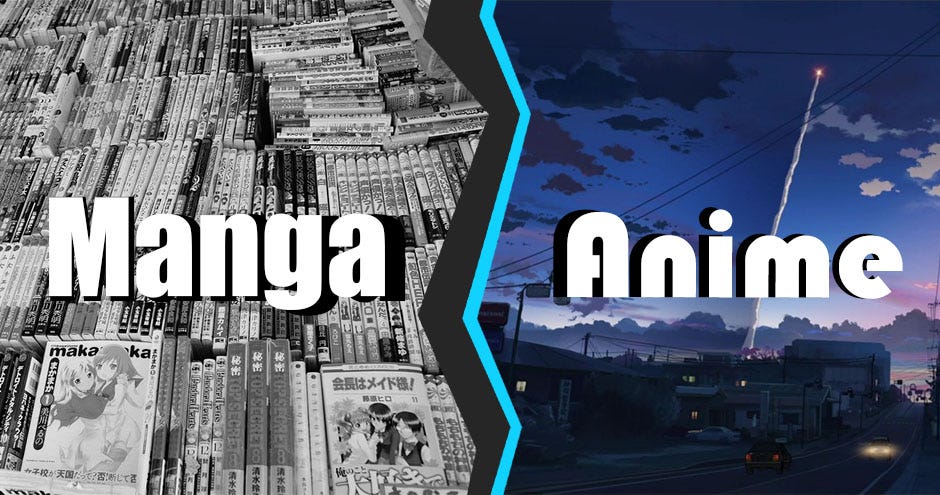 Anime and manga are two distinct mediums. Manga are graphic novels or comics drawn in black and white. They are released via chapters or volumes and are the base of many anime titles. Anime are TV shows or movies, that are an animated version of the manga source title. Their distinct look or way it's animated is based upon the studio company in charge of the animation. Popular anime titles are released in seasons, otherwise an anime series will run for only one season consisting of either 12 or 24 episodes. With anime and manga being different from each other, which one is considered the preferred medium for any person?

Reading manga is the equivalent of reading comic books. There are thousands of different manga available to the public, and with that many choices, not all manga get an anime adaptation. The same idea goes for comic book series adapted into movies. Depending on the series or the publisher, chapters are released weekly or monthly. There are benefits from reading manga, such as not being constrained to sit and watch a 30-minute episode and the ability to read at your own pace. For example, someone could read three manga chapters in the 30-minute span it takes to watch one episode of the anime. Another example of a manga reader having more freedom is not having to read any filler arcs. Fillers are used in anime to give a little break for more source material in the manga, or to stretch the season out a bit. In some cases, popular series like Naruto, Bleach, or One Piece, used a whole anime season for filler, but that is rarely the case now.

Anime is much more popular now than in the early 2000's, with plenty of people loving and watching it. Just like how readers have their perks, anime viewers also have perks that are not offered by reading. One very distinct difference is that the series is animated. The characters are alive, and not just stills on a page. When reading manga, the reader must use their imagination for everything; from the color of a character's clothes, to how the character would sound. That isn't the case for the anime adaptation, because everything is in color. The anime adaptation also has actors lending their vocal talents to give life to a character. Music is the greatest benefit for anime. Music is used to create intensity in a scene, or to create a comedic tone. Music is also used to create an intro and outro to an anime to get you ready to watch and have you look forward to the next episode.

With both mediums having pros and cons. What is the preferred medium?

The answer is simple; It is all about how you choose to enjoy it. If you love using your imagination to give life to a character, or you want to read as much of a series as you can without stopping, then continue reading. If you enjoy watching characters on your television and just want to immerse yourself in the animation, the imagery, or the music for hours, then continue watching. Both mediums should be respected for what they offer, and that no individual should be judged for how they enjoy a series.

What anime or manga titles do you recommend for people? Leave a comment down below, so we can check it out!