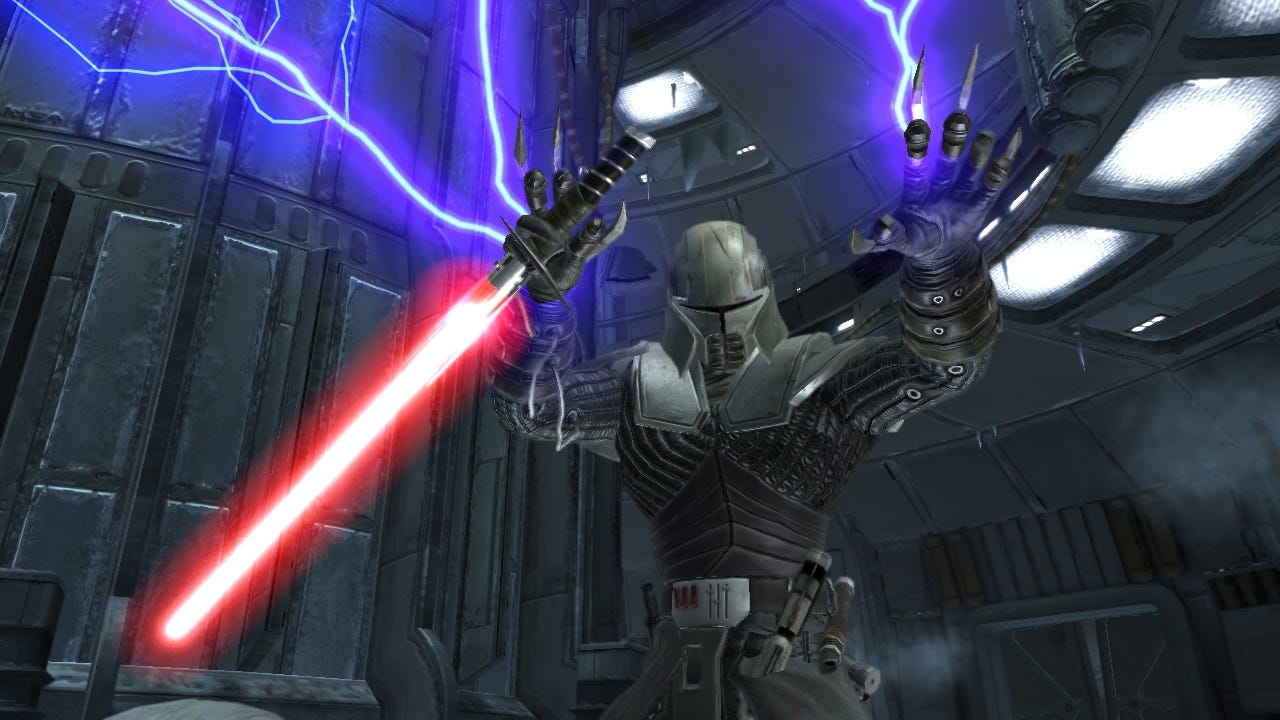 To celebrate May the 4th we thought it would be fun to rank our top 5 Star Wars video games. Obviously, there are a several amazing titles to choose from over the last four decades, going all the way back to 1983 with the classic arcade game, Star Wars, from Atari. Here players take on the role of Luke Skywalker piloting an X-Wing fighter set to destroy the Death Star. As a child that grew up in the 80's, I can honestly say plenty of my hard-earned coins fed this machine.

The most recent entry in Star Wars video games came last year with the smash hit, Star Wars Jedi: Fallen Order. The game was developed by Respawn Entertainment and sold a whopping 8 million copies in the first two months of release. This game also introduced us to several new characters to fall in love with including an adorable droid, BD-1.

Star Wars: Tie Fighter is a flight simulator that was developed by Totally Games and published by LucasArts. The game takes place after the battle on Hoth and players take on the role of an Imperial pilot. I remember saying "WHAAAAAAT? You mean we get to play as the bad guy? Holy smokes!" This game gave fans, including myself, new ideas on the possibilities of Star Wars and its future in gaming. There was something crazy about blowing up Rebel forces when you know and love their heroes. Maybe Luke was fighting for the wrong side. Afterall, the Empire is trying to spread order across the galaxy, which is no easy feat when you have Rebel scum starting trouble everywhere you turn. What a bunch of thieves and rioters if you ask me. Honestly, there ought a be law. Oh wait...

Shadows of the Empire will knock your socks off during the Battle of Hoth, but put you to sleep shortly afterwards. It's nearly impossible to argue against the coolness factor of the first level, where you pilot a snow speeder bringing down multiple AT-ATs with your tow cables. But after that the game fizzles pretty quickly. Still the first level is enough to make mention on this list.

Star Wars: Republic Commando is a first-person shooter developed and published by LucasArts. In the game, players take on the role of Delta Squad leader, "Boss," a Republic Commando that leads a pack of three elite troopers against Separatists army forces. This game gives fans an idea of what it's like being a clone trooper. The helmet has a HUD (heads-up display) which offers up information on targeting, ammo, and health. While not a radical concept, I never really put much thought into what a trooper sees through their helmet. In the films, Storm Troopers have terrible aim and I always chalked it up to poor visibility. I guess I was wrong. Either way, the game takes players to hell and back, battling countless droid armies and eventually Delta Squad is forced to leave a fallen brother behind. The game ends with a harsh reminder that "the painful reality of the Republic Commando is that duty must come before brotherhood." We never did get a sequel, but I would have suited up so fast and gotten Delta Squad back out there in the thick of things.

Star Wars Rogue Squadron was one of the first games to take advantage of the N64 Jumper PAK. This little accessory expanded the N64's RAM by an additional 4MB... Bringing that total to a whopping 8MB of RAM. Not to brag or anything but that also brings up the game's resolution to a crystal clear 640x480 pixels. Now you're playing with power... Regardless if you had the Jumper Pak or not, players got to take the helm of an X-Wing fighter and lay waste to a variety of imperial starships and ground vehicles through sixteen levels of pure awesomeness. Meeting the mission objectives was often challenging, but not to a degree where the player would want to force push their TV out the window.

The Force Unleashed cranked force powers up to 11! The very idea of using the force to pull a Star Destroyer down from the sky and crashing it into the ground still blows our minds. The mechanics in that particular level were a bit absurd, but the payoff was impressive. In the game, players take on the role of Starkiller, Darth Vader's secret apprentice. Your mission is to root out the remaining Jedi and bring them to justice. Sounds easy enough, right? Throw in the birth of the rebellion, over the top use of force powers and you have yourself quite an adventure. It doesn't matter if you're chopping off limbs, or throwing stormtroopers out into space, there is fun to be had by all.

Set five years after the events of Star Wars: Revenge of the Sith, players take on the role of young padawan, Cal Kestis, as he embarks on a deadly game of cat and mouse whilst trying to complete his Jedi training. The game is loaded with intense combat and killer cinematics including the always menacing Darth Vader. The ending is a trip and still a little too fresh for me to want to spoil anything. Let's not forget about BD-1, your droid companion that just lights up the screen anytime he's on it. Put down your toy lightsaber and pick up a controller. You have to play this game!

Coming in hot at #1 is Star Wars: Knights of the Old Republic. This 2003 hit on the original Xbox became an instant classic for fans of all ages. In a sort of choose your own adventure, players could make choices that would have a direct impact on how the story played out. There is a midpoint twist that shakes things up a bit, and by the end of the game you'll have to decide what kind of person you want to be. Are you the hero or the villain? Those dark side powers definitely make for a good time with force lightning and choking your enemies, but you do you, boo.

Super scary antagonist, Darth Malak, (your former friend and partner) is a Sith Lord looking to wipe out the Republic with the power of the Star Forge. The fate of the galaxy now rests in your very capable hands. You soon learn that you are the toughest Jedi around and no one, not even Darth Malak, will stand between you and your destiny. If you want to be a real rock star, you can even murder the companions that don't agree with your methods. It's your world, baby. They're just living in it.

There you have it folks! Which Star Wars games make the cut on your list? Let us know in the comments below.

Remember to check out our Destination Galactic Digital Event going on now through May 11. Here we have incredible savings on Star Wars Meisho Movie Realization figures and Bandai Hobby Model Kits.