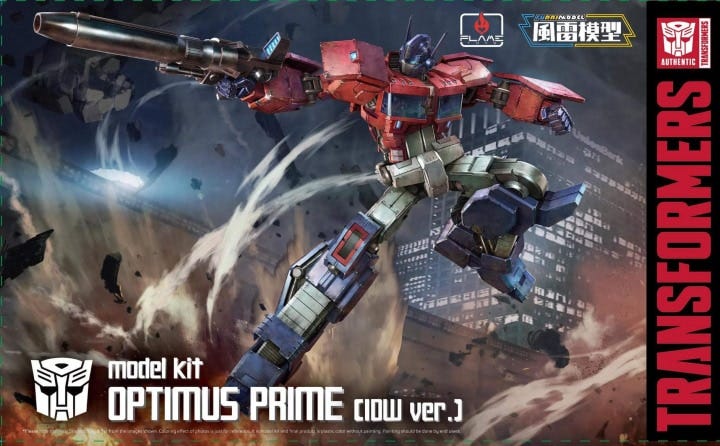 The Transformers franchise has been around since 1984 and has spawned multiple series since then. With each series there is a new design for the Autobots leader, Optimus Prime. He has gone through many changes, from his original robot-box-shape design, to a sleeker and more modern look. We looked at both robot and vehicle mode, and want to show you our top 5 favorite versions of Optimus prime, and they are:

When the first movie released, many fans were excited to see their favorite robots, but the first time Optimus transformed on the big screen was magical. Gears were spinning as parts were moving around to form the iconic Autobot. Peter Cullen returning as the iconic voice of Optimus is just amazing and adds to the spectacular moment. His design is unlike anything we've seen, because well...there hasn't been a live action Transformers prior, making this our #5 favorite version of Optimus. Ever since the release, we've seen plenty of blue trucks sporting the red flames, and we know what they are.

One of our top 5 versions of Optimus is from the video game Transformers: Fall of Cybertron. It is the sequel to Transformers: War for Cybertron, and it features a unique design for Optimus Prime. His vehicle design is drastically different, that if it wasn't for the iconic color scheme, we might have not realized it was Optimus at all, but that doesn't stop it from looking cool. The windshields look sleek and minimal with a big blaster attached on the top; definitely pulls off the futuristic look. In his robot mode his torso is slightly thinner at the bottom with a bulkier top, and from the looks of his arms, he's been pumping some iron. Overall, this Optimus is different in a positive way, but that unique vehicle form really makes it our #4 spot.

Our #3 spot goes to Transformers Armada Prime. Optimus Prime in this version was bulky all around but had an awesome design; the blasters on his wrist, big tires on his legs - he just looked like someone you definitely did not want to mess with. If it wasn't just his robot design, his vehicle mode looks great and it was hauling more than just a standard trailer like his G1 counterpart; it was a base for the minicons and was able to haul other vehicles like Overload and Jetfire. Did we mention he has a super robot transformation? It's fantastic.

Our #2 favorite version is Shattered Glass Optimus. The entire Shattered Glass story is interesting - Autobots are evil and led by Optimus Prime, while Megatron leads a band of rebels to fight for justice. This Optimus has a color scheme unlike other Optimus past and present; his iconic red is changed to purple, while his original gray arms and legs become black, while the blue's are darker. Aesthetically to show his madness, he has a crack on his right windshield; which we think is a nice touch. This evil version of Optimus is unique that even Flame Toys has made a model kit of this version of Optimus.

When the original series premiered, Transformers were the coolest looking robots around, and you had to own the toys. Then, in 1996, they created Transformers: Beast Wars. Our favorite robots had been redesigned as robots that could transform to beasts. Optimus Primal is not Optimus Prime, which is why he is in our honorable mention. What's scarier than a massive gorilla? The answer is a massive gorilla that can transform into a robot with cannons on his back! Also, a missed opportunity for OptiMOOSE Prime.

Nothing beats the original Optimus Prime. His original design is iconic - simple squares and rectangles with a balance of colors. Even in his vehicle form he looked fantastic, he was a regular truck that looked inconspicuous, which was the point of franchise "robots in disguise." As we mentioned earlier, there's a good balance with G1 Optimus, unlike some renditions, where the design went over-the-top with big torso's, skinny thighs with bulky calves or just crazy shapes that could somehow still transform him into a truck. Those designs were good, and is a great way to appeal to new viewers, but for us, G1 Optimus Prime will always be our #1 favorite.